I was reading Mike T's blog article about Antorcha, a Blowtorch repaint that was released in Argentina. I love his blog. His articles are always insightful. In the article, he mentions that he would have liked to have gotten different Blowtorch versions from international markets:

"So, there's 6 uses of the mold: but 4 are basically the same and the other two are just slightly different. I'd have loved a Night Force Blowtorch, an Action Force green Blowtorch, a Sky Patrol Blowtorch (though TNT kind of fills that role), a wacky Funskool Blowtorch and even a desert themed Blowtorch." - Mike T.

I did a whole bunch of Blowtorch versions a while back using spare 50th figures, but an Action Force version never crossed my mind. Since I still have figures from the 2-packs, I decided to take on the challenge.

The build is simply 50th Blowtorch. I swapped the head since I consider him a different character in my Joe-verse. For colors, I picked the same pallet as my previous Z-Force customs - green with black and red accents.

Edit: here is the link for Mike T's blog 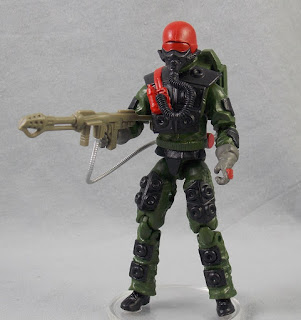