Big Jim was a 10 inch action figure toy line produced by Mattel from 1971 to 1986. The star of the line - Big Jim - was the action hero who could master any sport on the way to his next adventure. Each figure featured a push button on their back that moved right arm up and down karate chop style.
Big Jim evolved during the decade and a half that he was on store shelves. He started out as a sportsman who indulged in all kinds of outdoor activities like fishing, camping, rock-climbing, skiing and formula one racing. As the years passed, Big Jim became an adrenaline junkie as he kept looking for more dangerous activities. He eventually became the leader of the P.A.C.K. –Professional Agents Crime Killers – a group of spies and special agents who against Zorak, the ruler of the Underworld.

I don’t remember Big Jim toys from my childhood. None of the neighborhood kids had any as we were all pretty much the same age. Big Jim toys were mostly released in the ‘70s and by the ‘80s, toys had shrunk in size. However, as an adult, I became interested in learning about 1970s toys and Big Jim had much in common with GI Joe.

Big Jim’s Sport Camper is easily one of the most recognizable toys in that toy line. The original was made of plastic and vinyl, could open up for inside play and was packed with accessories. For my custom, I used a Playmobil bank truck as a base. It replicates the original’s shape pretty well. It does not open up in the same way, so I built the add-on ‘’gazebo’’ for display. I also tried to replicate as many of the original accessories as possible.

The original Big Jim’s Camper included a yellow flat bottom boat for fishing expeditions. I tried to find a similar boat to include in this set and I came up empty. However, that forced me to look elsewhere. Adventure Wheels makes a set that includes a kayak so I started there. After painting it yellow, it was begging for an Adventure Team logo. Since this is a GI Joe crossover, I figured, why not? I will be adding this to my modern Adventure Team now. 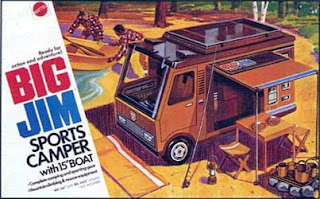 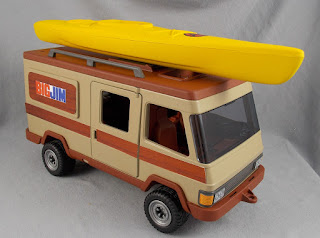 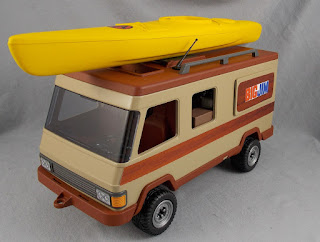 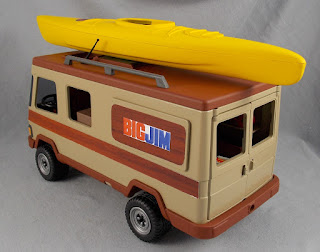 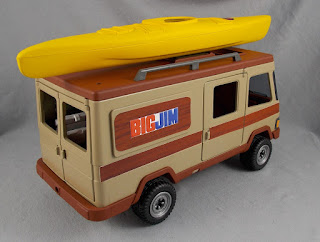 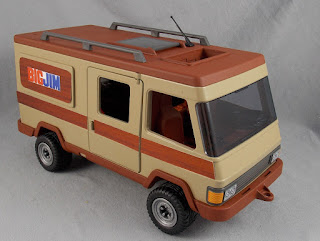 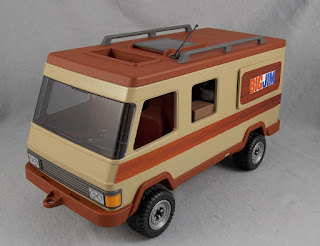 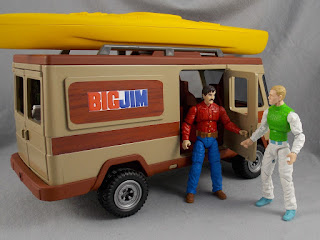 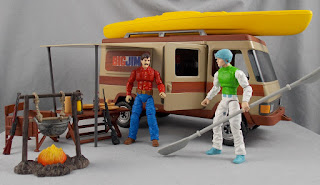 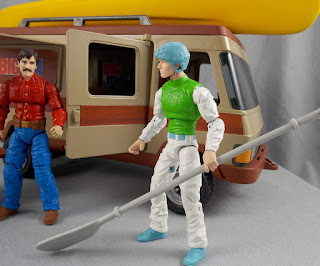 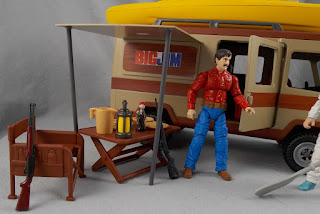 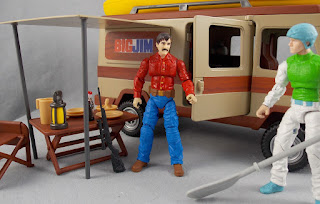 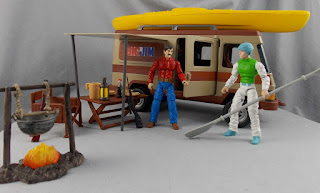 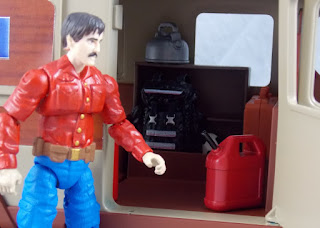 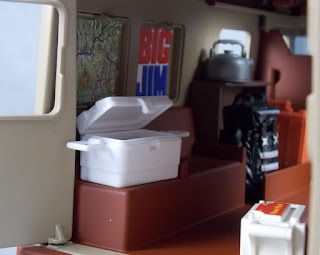 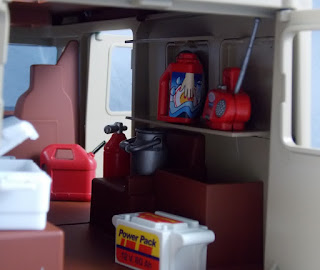 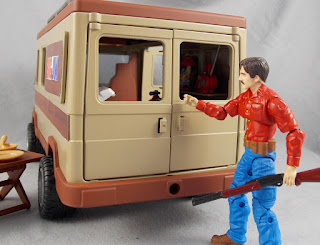 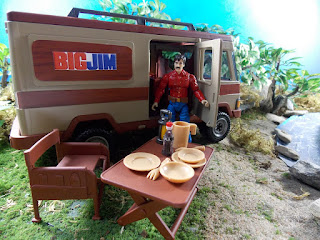 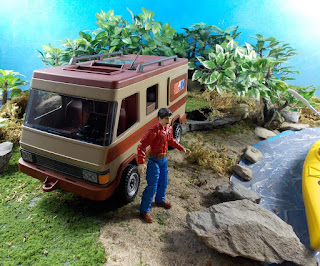 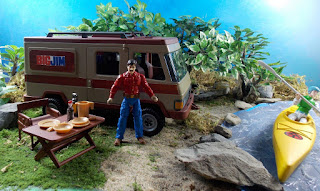 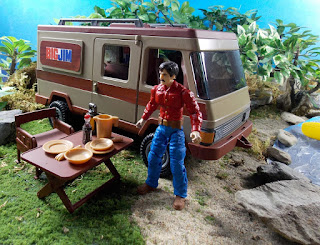 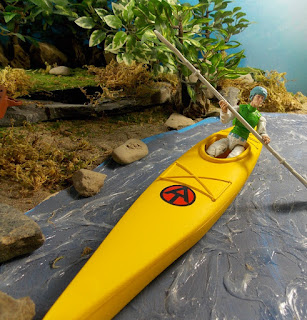 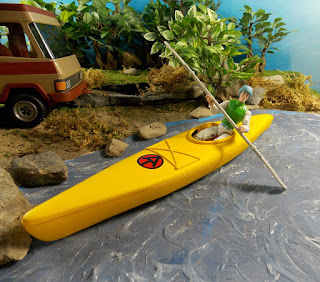 
Camping Guy
I had been planning to make regular civilian figures for a while now. I plan to use them in various diorama shots and to have people for GI Joe to rescue. This project gave me the opportunity to make a few different ones. I still need to add some females to that group, but it is a start. Originally, this guy was meant to be a Joe that was on leave and decided to go camping to get away from it all. I couldn’t decide which Joe to make, so I went generic knowing that I can always head swap later. 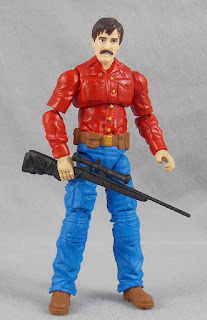 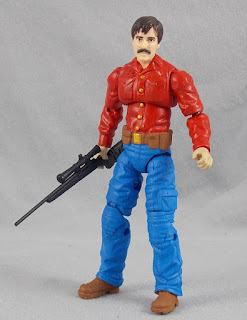 
Kayaker
After deciding on the ‘’Adventure Team’’ kayak, I wanted to add a kayaker. I remembered that the old Fisher Price Adventure People had a couple of kayakers in the line. After some quick research, I settled on this one for a couple of reasons. First, I like the bright green shirt and light blue helmet. Those colors are very ‘80s in my mind. Second, since I was using Storm Shadow legs for the figure, the white pants are preferable to avoid paint wear when I was posing the figure in the kayak. 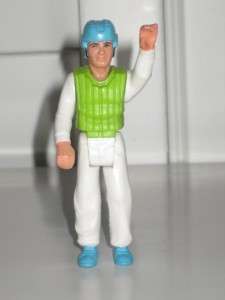 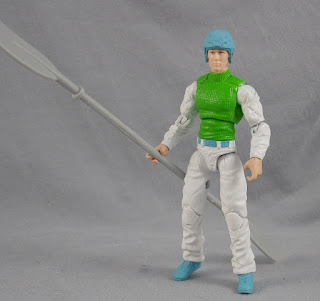 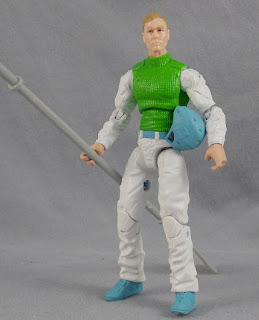 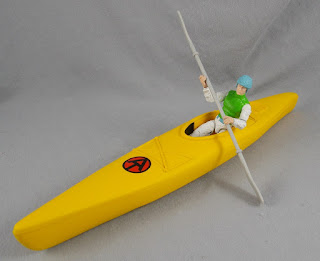