Joecustoms.com’s eighth annual Custom Celebration starts today. Each year, Custom Celebration is two weeks filled with new customs, tricks and tips, contests and challenges. There is something for everyone from beginners to seasoned customizers. Everyone is welcome.

This year, to help celebrate the event, Bucky and I have made a series of customs. So, tune in each day for the next tow weeks for at least two new customs based on characters originally released during the infamous New Sculpt years.

Check out the new reveals here or visit us at Joecustoms.com to partake in all kinds of custom goodness: http://www.joecustoms.com/forums/viewforum.php?f=105

During his 50 years of existence, GI Joe has undergone numerous transformations. In the 1960s, he started as a 12’’ inch action figure of a military man. In the ‘70s, he became an adventurer and fought against alien cavemen. In the ‘80s, he shrunk down to 3.75’’ to fight the forces of Cobra. In the ‘90s he became neon colored and extreme and by the end of that decade he went back to his ‘80s roots.

In 2002, Hasbro brought GI Joe into the 21st Century. No longer content to re-use 20 year old molds, Hasbro created all new tools for GI Joe and, in doing so, infused and old favorite with a whole new look.

The ‘’New Sculpt’’ era, as it came to be known, started with the GI Joe vs Cobra line. However, it had a rocky start. The new figures had different construction than the previous real American hero. The first waves were plagued the infamous ‘’T-Crotch’’ and were not well received by fans. However, Hasbro quickly returned to the classic o-ring and the GvC line took off.

What we call the New Sculpt era is actually several product lines starting with GI Joe vs Cobra, followed by Spy Troops, Valor vs Venom and finally the internet-exclusive Direct to Consumer line. Along the way, old soldiers were given fresh looks and new characters were created.

After 5 years and hundreds of figures, GI Joe went through another transformation on his 25th birthday that would usher in a brand new type of figure construction. Looking back on that period between 2002 and 2006, the New Sculpt era is a mixed bag remembered for strange figure proportions and so-so accessories, but also memorable new characters and fresh new ideas.

‘’I've mentioned in the past that Duke is my favorite Joe, so he was top on my list. along with a couple of other figures, he was one of the first ones I had pieced together before I made the call to OB to help me out and create a large project. He started out as an ultimate Duke for me, as I was going to make him with classic yet modernized webgear, and the alternate uniform was to be his GvC vest and helmet. After I scored another Kwinn figure, I ended up doing both, and this Duke became a figure of his own. I had a lot of fun trying to figure out how to make his vest come to life using modern era tooling. I'm pretty satisfied with him.’’ 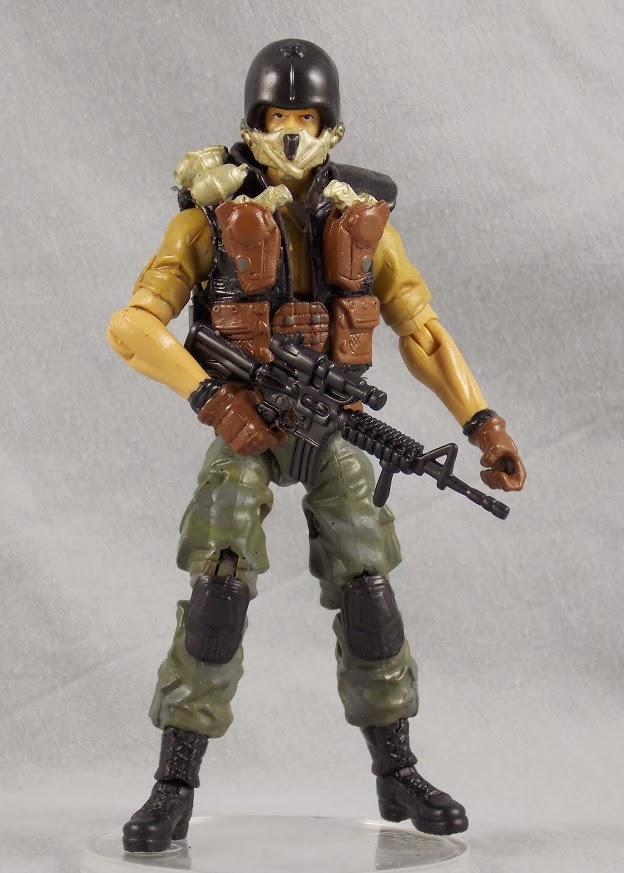 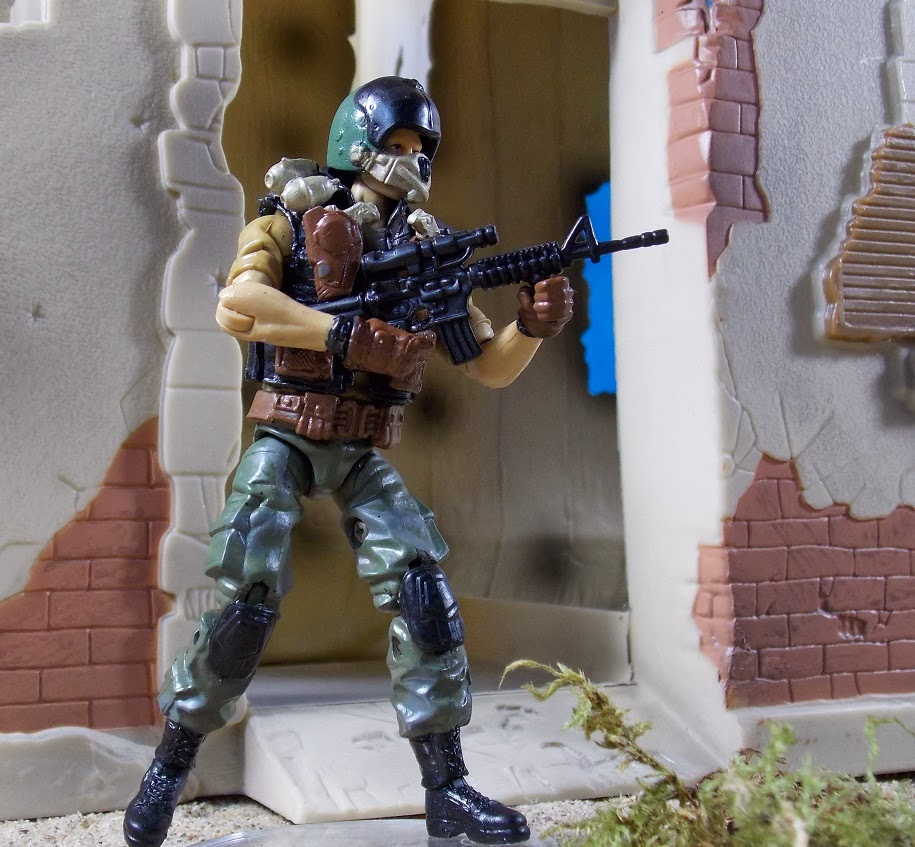 ‘’Released in 2002, Firefly was among the first New Sculpt figures built with an o-ring and was departure from the classic look of the character. The color scheme and design made him interesting to me and when Bucky came calling about this project, Firefly was one of the first figures I wanted to do.’’ 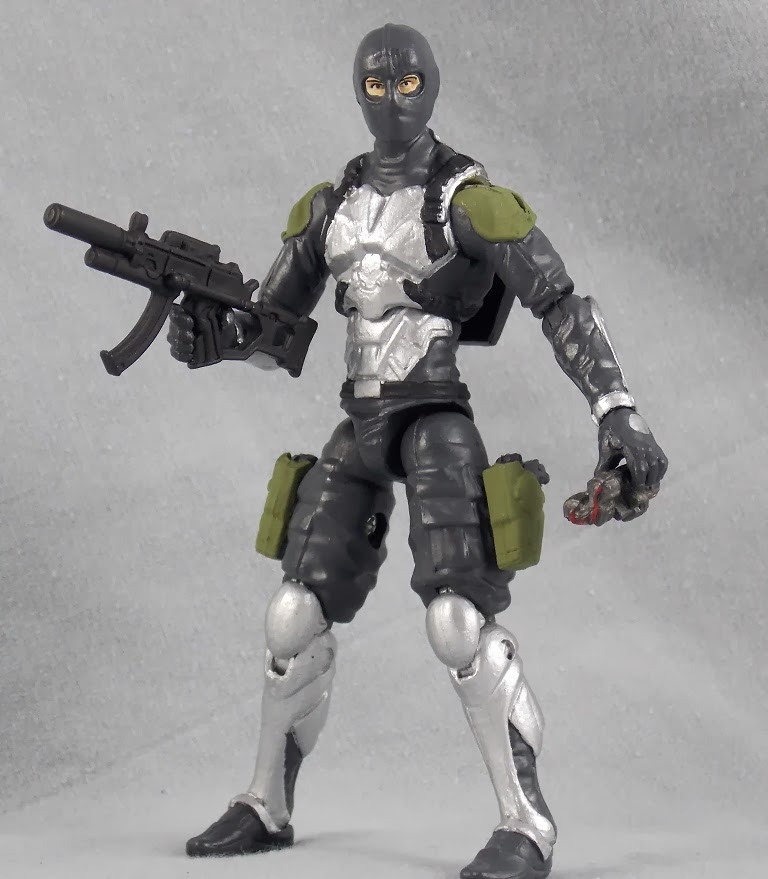 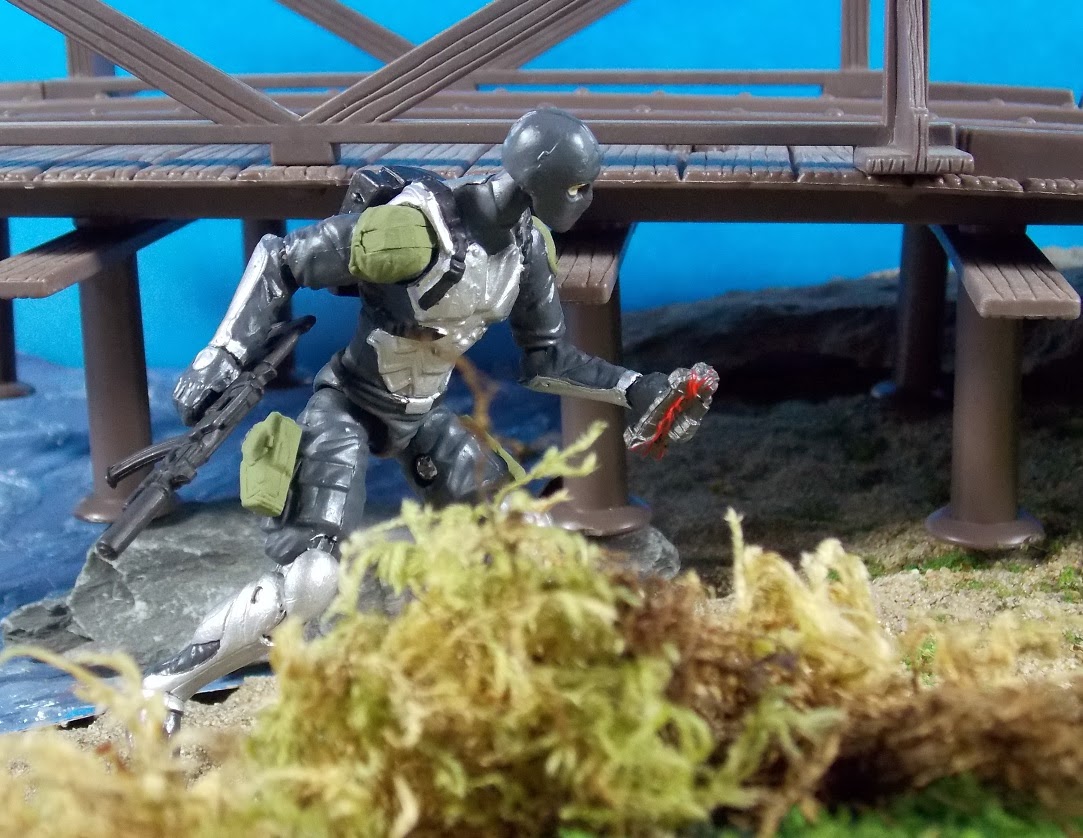 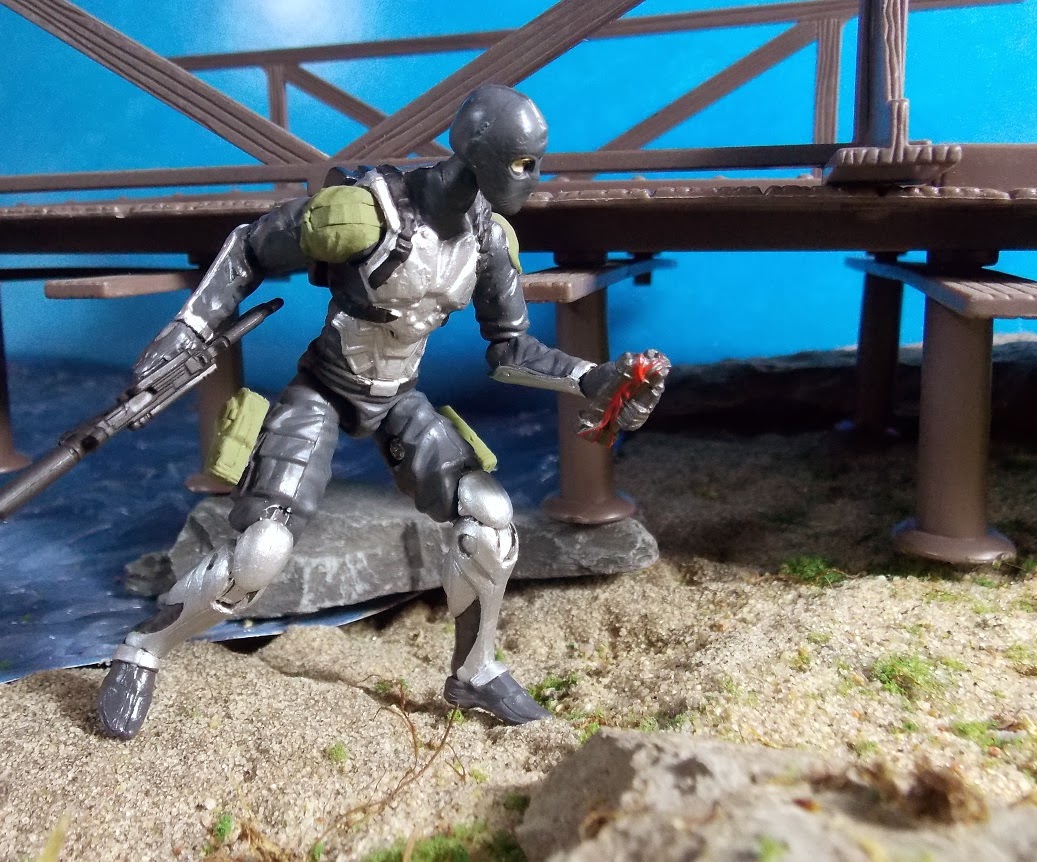 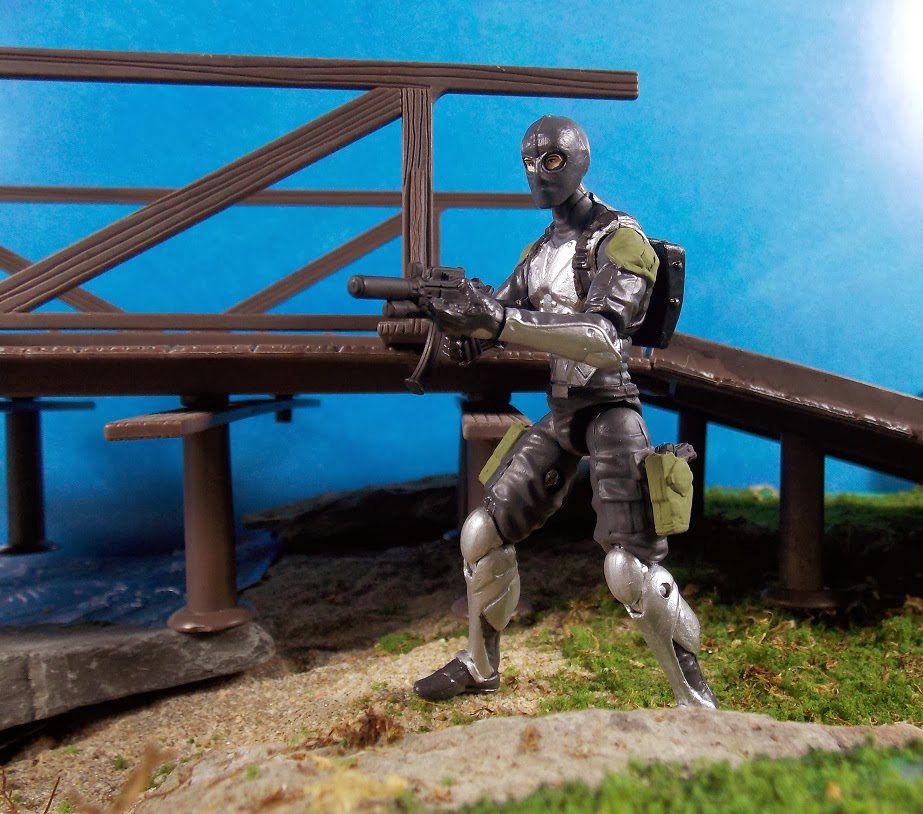 ‘’You can't have GI Joe without Snake Eyes it seems. To start off the project, I wanted to do the one of the first snake eyes to come out during the area, in the odd grey and purple color scheme and all. Since it’s not normal to see him in these colors, and he only wore them during this period, it seemed like the perfect choice to kick off the project, and it's a custom that hardly anyone has done (maybe even nobody)! I'm very pleased with the way he turned out, and he ranks right up there with my personal favorites.’’ 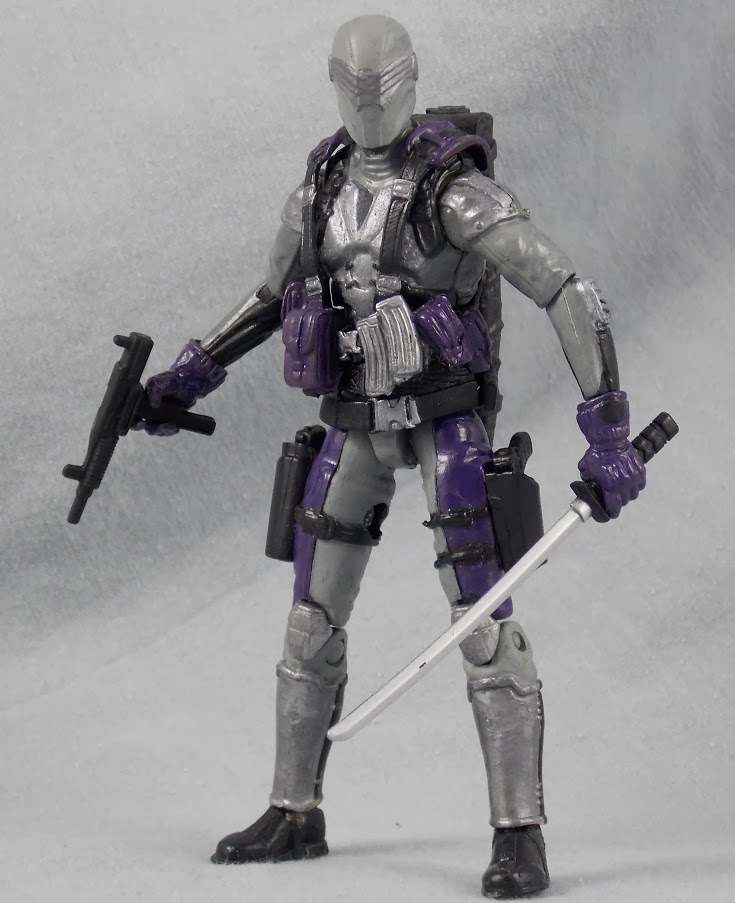 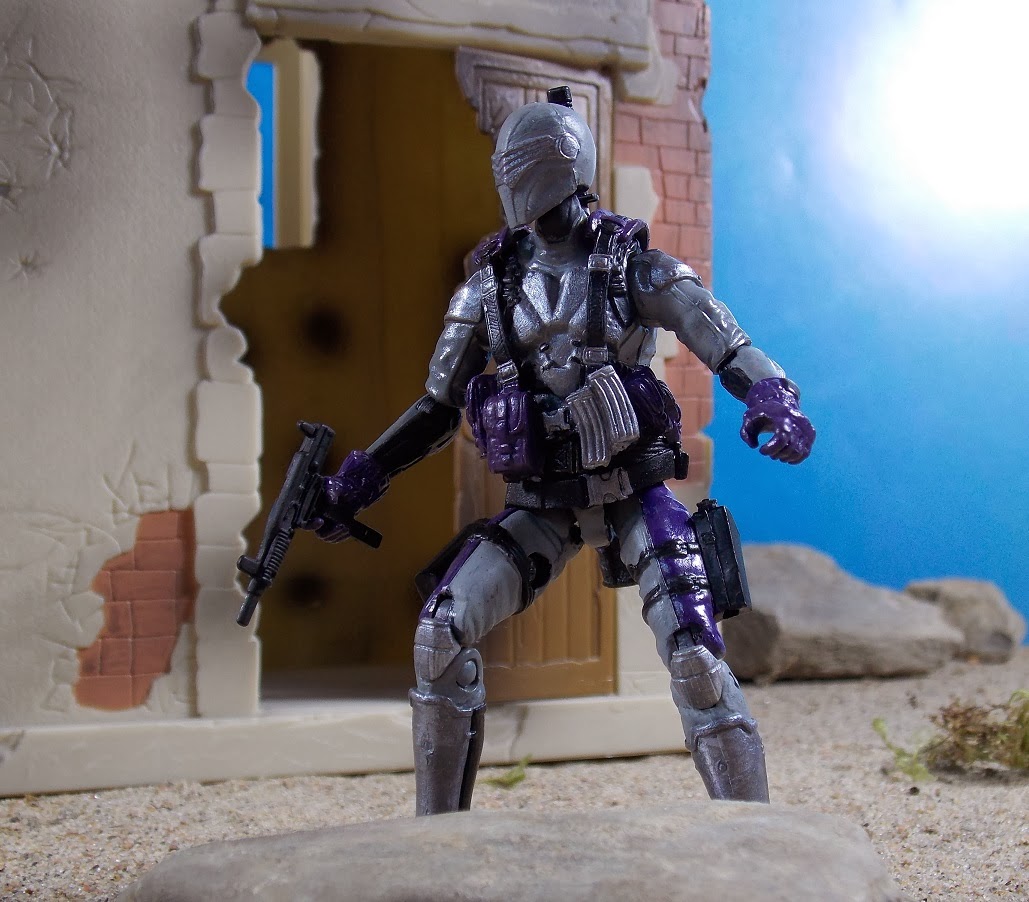 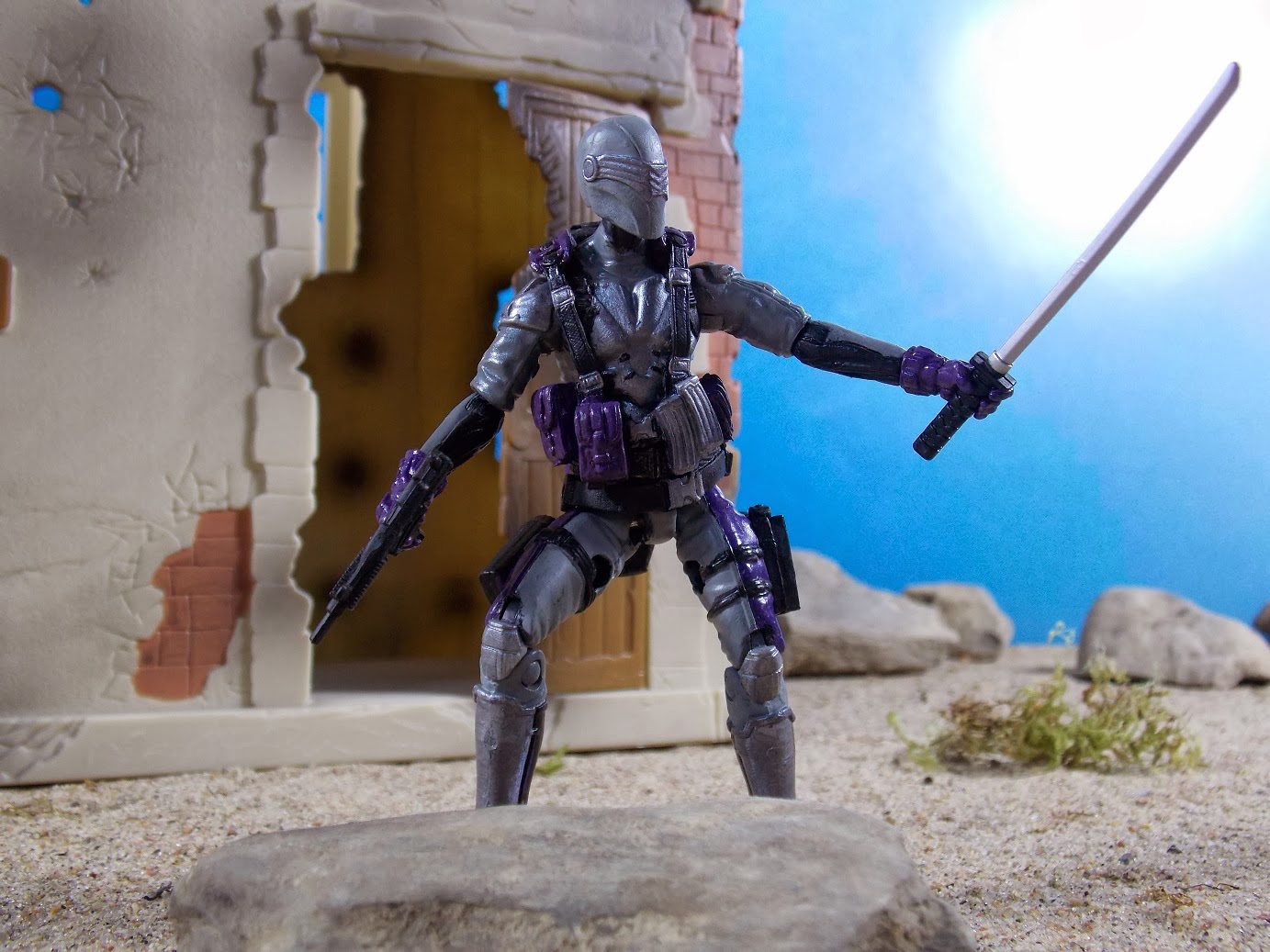 ‘’Storm Shadow (V10) was originally released in 2002 as part of the GI Joe vs Cobra line. His original figure used ‘’T-Crotch’’ construction and probably one of the worst figures of the character. Fortunately, some of the concepts from the original are pretty cool and those are the ones I tried to preserve while making this custom. The grayish green and white color scheme is what made me want to do it. Green is not typically associated with Storm Shadow so that made him interesting.’’ 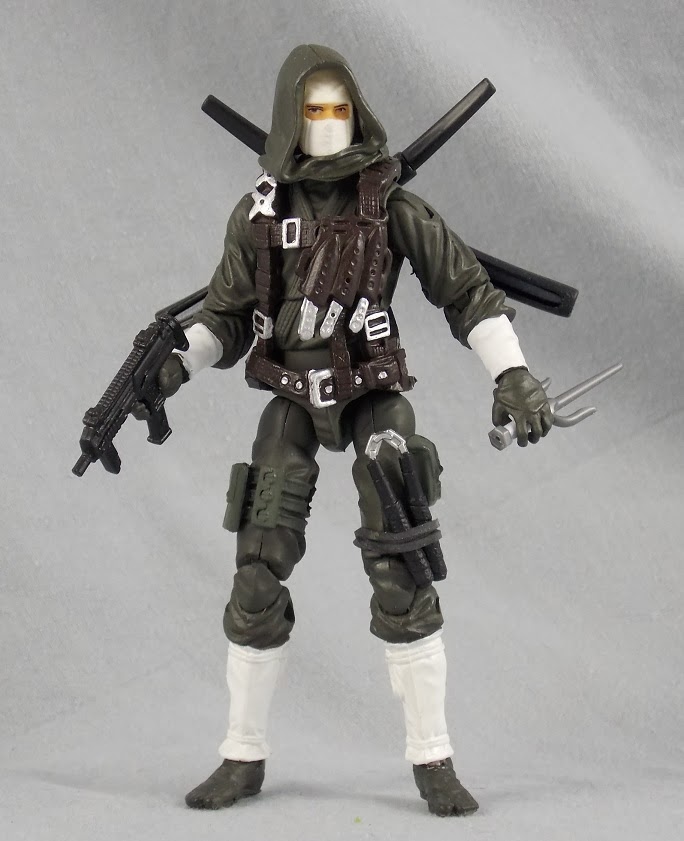 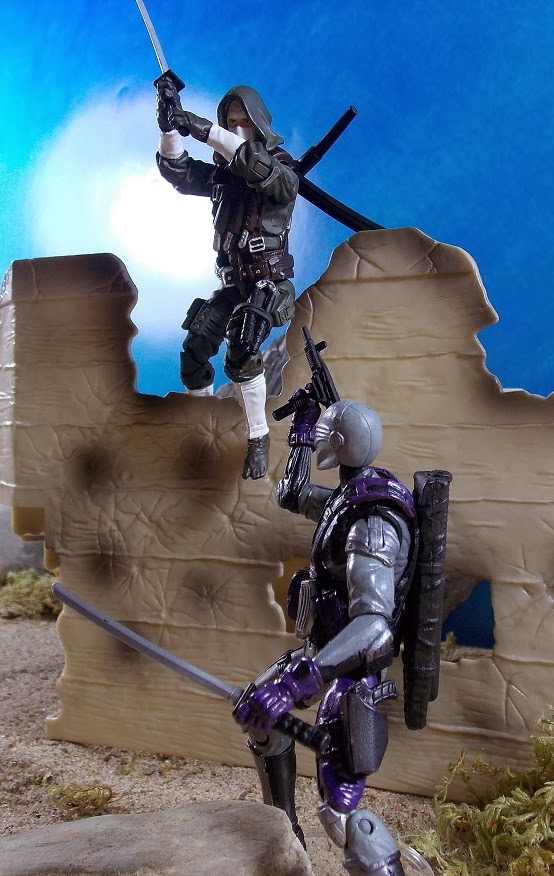 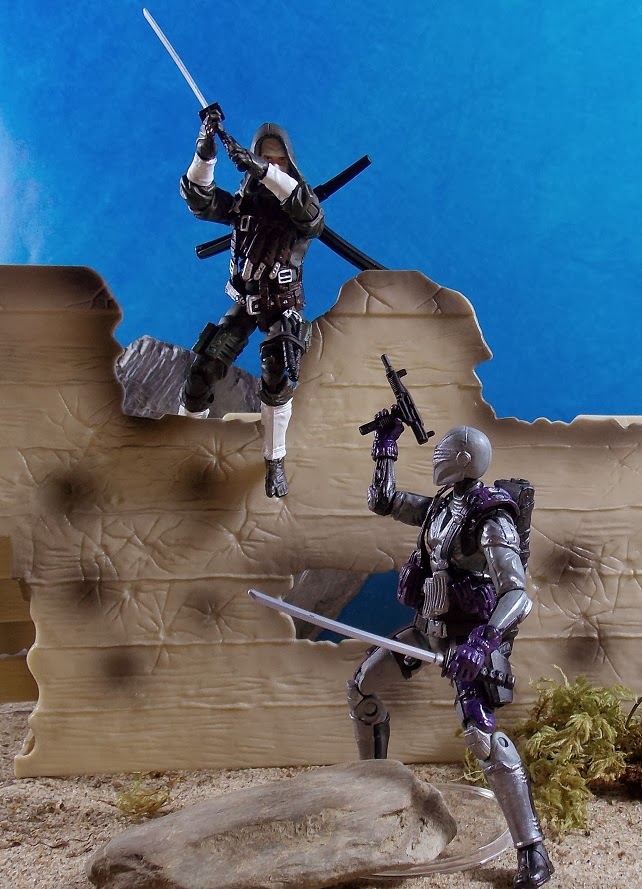 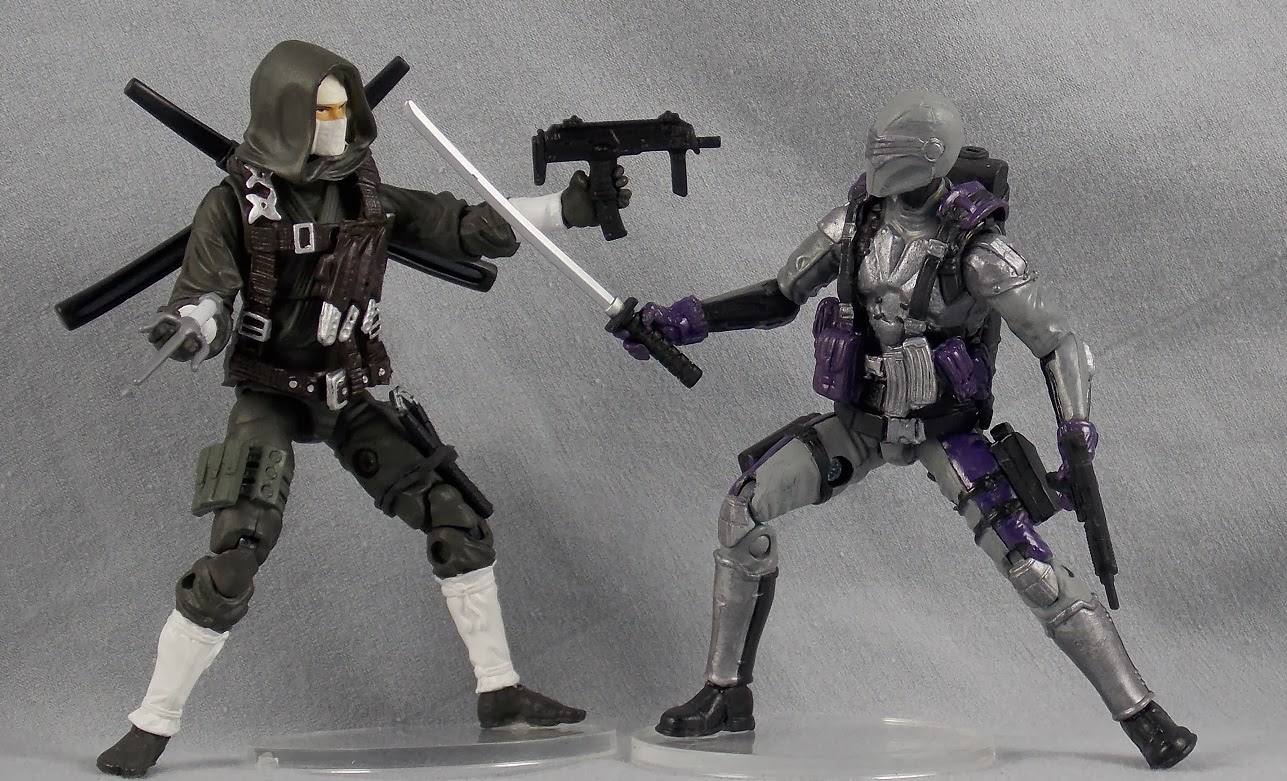 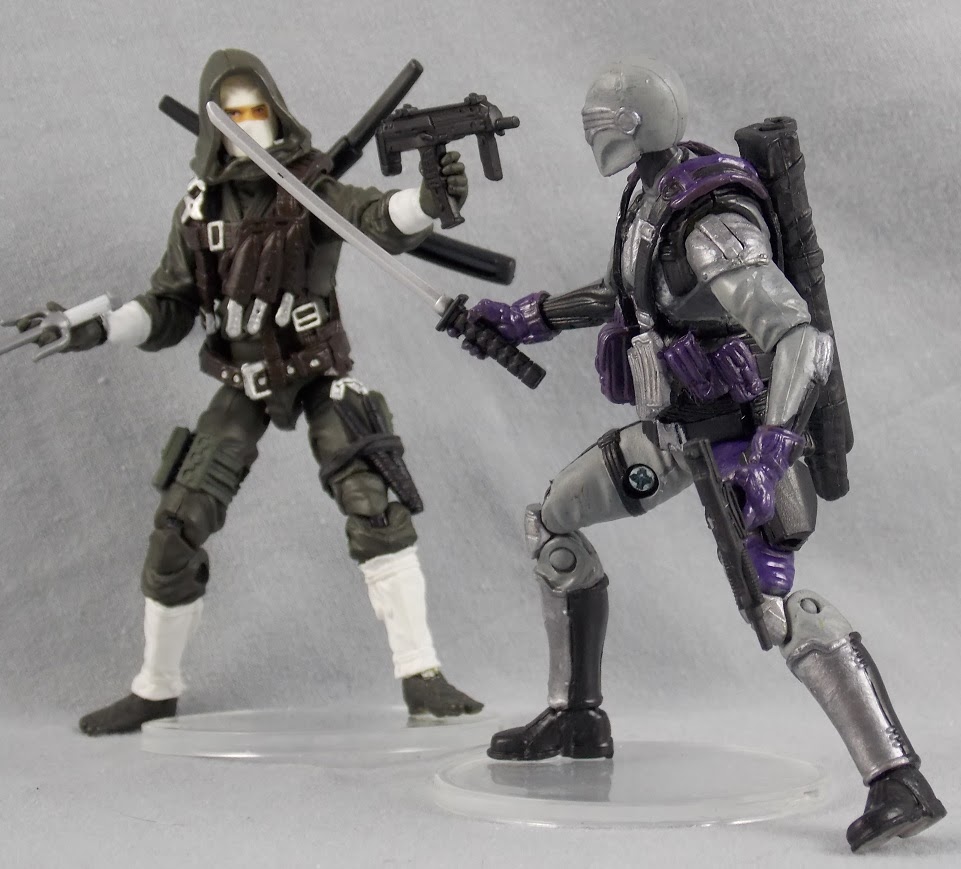 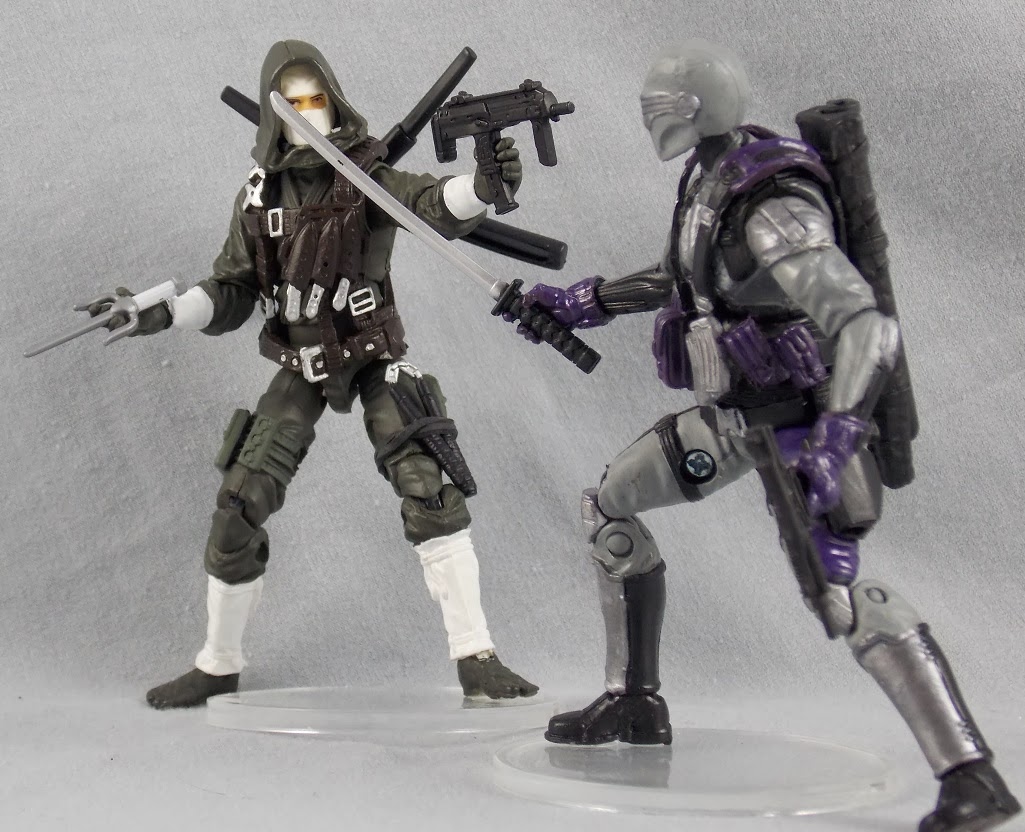