The Retaliation 3-packs are chock full of great figures. Besides being a fun figure by his own right, Sgt Airborne can also be very useful for customs.

The torso, arms and legs are sculpted with details like pouches, armor, zippers and tabs. These parts can be useful to make an updated Wild Bill, Ace, Sky Patrol or even Payload or Star Brigade.

Airborne’s head was originally to be released with Renegades Law and Order.  Although that did not work out, I’m glad Hasbro found a way to use it. Airborne’s head is sculpted with a balaclava with openings for the eyes, nose and mouth. It is perfect to make a SWAT team member, a terrorist, a bank robber or even a snow trooper.

In summary, from head to –toe, Airborne is nothing but useful parts. They are generic enough to be versatile while still being well sculpted and detailed. Sgt Airborne is definitely worth picking up for fodder if you have a chance. 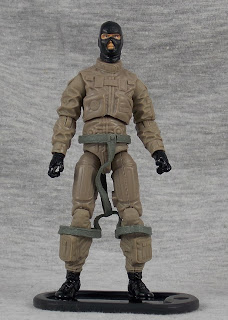 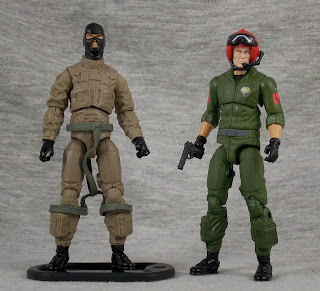 Who is Kwinn? Only the most requested character-never-to-be-made-into-a-figure ever (His Valor vs Venom version doesn’t count). Any fan who grew up reading the original Marvel comics knows who Kwinn is since he was an important character in the first 25 issues. Enough history, Hasbro has finally released him as a figure and knocked it out of the park. Once you have one for your collection, I suggest you pick up more for your fodder bin. You won’t be disappointed.

First off, the torso and upper arms are reused from Rise of Cobra Sgt Stone. The shirt is generic enough to be used for any number of characters like Dusty, Recondo, Falcon or Duke. The sleeves are rolled up. The bare lower arms are well sculpted and the right length to work with most figures (Contrary to Sgt Stone’s original extra long arms). The hands feature the extra articulation and are bare (no gloves) as well. For me, it will be time to update some characters like Breaker, Rock & Roll and Clutch that should not have gloves.

However, Kwinn also features some new elements: his legs are sculpted with shorts. These can be used to make a Valor Vs Venom Alpine or any type of adventurer, hunter or safari explorer figure.
Kwinn also comes with a ton of gear. Some of it, like the hunting rifle and the M2, is extremely well crafted and is useful for several figures. 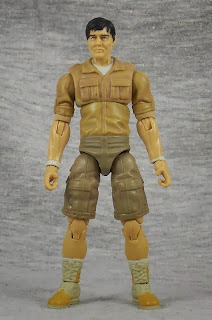 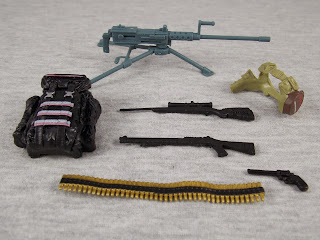 It is safe to say that Ultimate Duke was one of the most anticipated figures from the entire Retaliation line. It is easy to see why. The sculpting and details are excellent. The paint applications are numerous and well executed and he comes equipped with a ton of weapons as well as a new drone and a cool alternate head.
These same reasons make Ultimate Duke a cool base figure to use for customs. The legs are newly sculpted with folds and a holster on the right side. They are nice and bulky and could be used for a variety of different soldier types including desert and arctic troops. The ankles are the new ‘’rocker’’ style and include the pant detail that effectively camouflages the articulation point. The torso and upper arms are re-used from the GI Joe Trooper and are very similar to the hugely popular Cobra Shock Trooper. They are generic enough to be used in different ways yet they have the right amount of sculpted details. The forearms are new. The left forearm has a small screen/tech detail sculpted on. This would make a great, downsized version of the Sigma 6 gauntlet or could be used for several different characters like Hi-Tech, Med-Alert or updated Mainframe or Dial-Tone.

The Channing Tatum head is pretty useless in my opinion. However, the alternate head is pure gold. Originally released with the 5 POA Night Fox, the alternate head is clad with a SWAT-type helmet and goggles. I have already used this head to make an updated version of Battle Corps Beachhead, but it could also be used for Shockwave, a DEF Trooper, a SWAT officer, a SHIELD soldier or even for a new Cobra Viper. 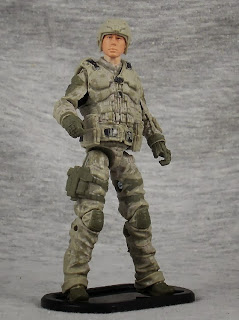 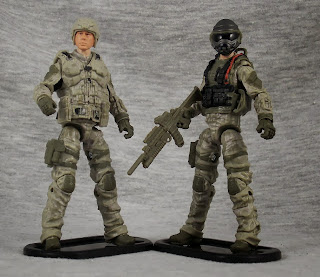 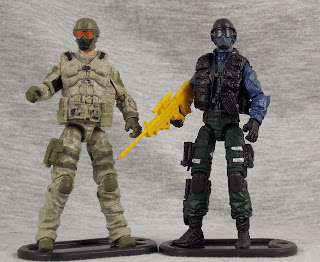 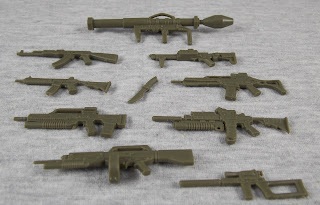 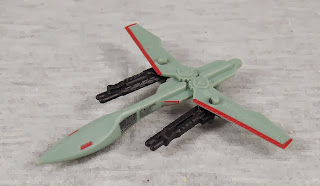 The Pursuit of Cobra wave 3 Snake Eyes is considered by many fans to be the pinnacle of Snake Eyes. It is hard to argue with that. The ribbed shirt, the detailed pants, the working holsters and the super detailed sculpting all contribute to make that Snake Eyes a fan favorite. After he was released, Hasbro re-used the same tooling (or some of it) to make several more fan favorites like Steel Brigade Trooper, Cobra Trooper, DG Shipwreck, Stalker and Lifeline. Now, in the Retaliation line, these great parts make an appearance on a couple of figures and I could not be more pleased.

Beachhead and Snake Eyes share the same body construction. I won’t describe the re-use potential for these parts as Hasbro has already proven it by re-using so often with brilliant results. Several customizers have already used these bodies to create updated versions of the original 13 as well as various other characters.

The only thing keeping these figures from the number 1 spot on the list is the fact that the tooling was not introduced in the Retaliation line. 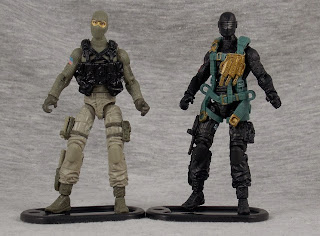 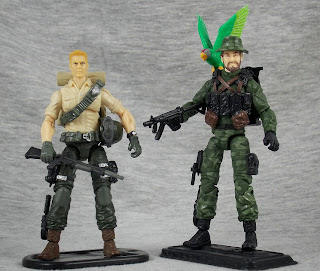 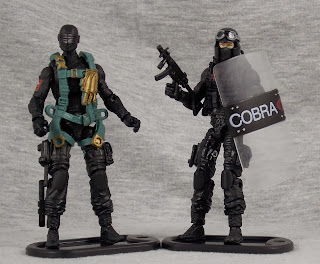 Here we are at number 1. So what makes 3-pack Firefly worthy of the number 1 spot? Basically, every one of his parts can have multiple uses.
His head is clad in a balaclava and can be used for a ninja, a masked robber, a terrorist, a special forces operative or even a diver.

His legs are from 30th Lifeline and share some parts with the famous PoC Snake Eyes. However, they throw a new kneecap into the mix: one without kneepads. This increases the versatility of these legs in my opinion. Now we can mix and match the upper legs between Firefly and Snake Eyes to change the holsters and pockets from one to the other.

His arms are also from Lifeline and feature great, sculpted detail yet are generic enough to be used for almost any figure that needs long sleeves. The hands are fully articulated and feature no details, so they can be easily painted in flesh tones.

Then we have the newly tooled torso. It features a jacket over a shirt detail. Hasbro has already used this torso on their concept case Flint and Hit & Run. It also makes a great base for an updated Dial-Tone.
The webgear is useful as well. Any piece can be cut away or modded to make it look different. Again, I’ll cite my Dial-Tone as an example. The backpack is pretty generic and can be used to outfit practically any figure that needs one.

All in all, 3-pack Firefly packs a pretty good punch as far as customs potential. If you have a chance to pick up any extra 3-packs at a decent price, I highly recommend adding as many as you can to your fodder box. 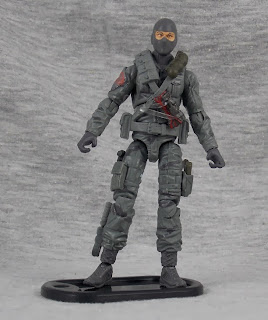 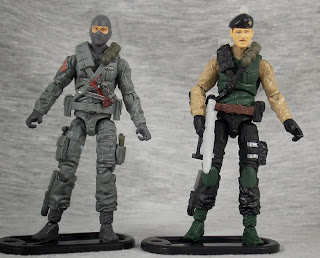 Best of the Rest

There you have it, my top 10 most useful Retaliation figures for customs. I thought that I would mention a couple of others that could be considered the best of the rest.

A few figures Okay, I know what you’re thinking. This is OB’s first top ten list and he’s already off his rocker. How can a 5-point of articulation piece of poo poo figure be one of Retaliation’s most useful figures? Well, one answer: his head. Look around the interwebs and you’ll see that Clutch’s head has been used in several fantastic customs. It could be used for Rock & Roll, Hollow Point, a modern Clutch, private military contractors and other characters.  For good reason, the head sculpt is great and full of personality. The sunglasses and baseball cap are modern designs and the beard is very well sculpted.

Despite the body being basically worthless, the cool factor of the head and the fact that it is compatible with ME Joes makes it good enough for Clutch to get a mention on the list.

I went back and forth about including Ultimate Storm Shadow on the list. Like Red Ninja, his parts are probably only goos to make other ninjas. Although Storm Shadow features great sculpting, articulation and accessories, I chose Red Ninja over him because of the armored wrists and shinpads. These details offer something new to our fodder bins, whereas Ultimate Storm Shadow parts (although exceptionally well sculpted) are similar to what has been around since the 25th anniversary days.

And lastly, we could make the case for the Cobra Combat Ninja. Built from mostly PoC Shock Trooper parts, the CCN definitely has some some useful components. However, he doesn't offer much in the way of new elements: two heads and a helmet, so I scored him lower. However, if you come across him, don't pass him up. He is worth buying for customs or army building. 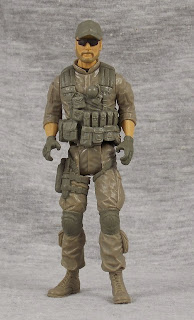 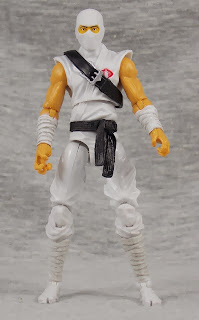