Nemesis was born John Baker Smith in Hartford, CT. Raised in a middle class family, he followed his father's footsteps and became an insurance agent. He had a wife, a child, a house in suburbs, a dog and a white picket fence. He followed all the rules and lived the life that was expected of him. Until the day he was laid off from the insurance company he worked for. Shortly thereafter, his wife left with their child and the bank foreclosed his home.

That is when John snapped. He had always followed all the rules and done what was expected of him. How could this happen to him? He quickly became angry and disillusioned with American society. Through an ex-work colleague, he joined the American Brotherhood, a radical group bent on over throwing the US Government. Along with giving financial and insurance advice, he spent two years learning combat techniques and training with a wide variety of weapons and explosives. Through his financial activities with the group, he found out that Cobra was funding the American Brotherhood's activities. He seized his chance to create a completely new identity and join Cobra as a consultant.

In 1981, General Mamba, backed by Cobra, had just taken control of the Greater Republic of Zambriot and needed some of Cobra's consultants to help him rebuild his military and consolidate his power base. Nemesis - John's new persona - joined him as a military and financial expert. He has since helped to destabilize neighboring countries as a prelude to Zambriot invasions.
----
Nemesis seemed like one of the most interesting R.I.O.T characters to me. Unfortunately, online information about him - including good pictures - was hard to find. Since I could not find a scan of the comic on the back of his card, I completely made up his bio to fit my Joe-Verse. 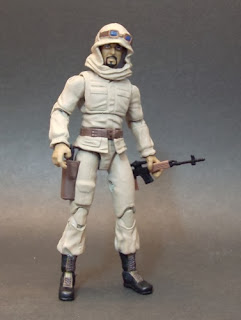 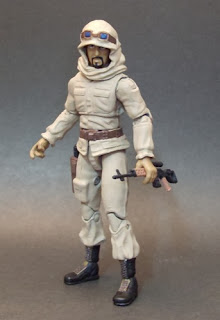 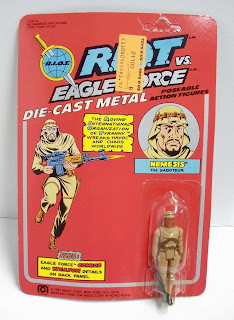