Most collectors will agree that the 1986 V1 of the Cobra Viper is among the most iconic figures of the entire vintage line.  In 1994, Hasbro brought back the Cobra Viper, albeit in a much different iteration. The Battle Corps version is clad in purple and orange armor and looks more like a Star Brigade reject than a Cobra infantry trooper.Still, despite the loud colours, the Viper had much going for it.

Since I have fully embraced my inner neon and I took the leap to making a modern version of the figure. Of course, whatever is worth doing, is worth overdoing, so I made 4. I tried to keep the armored look by using the Iron Grenadier body. I did not have access to the vintage head, but I thought that the Cobra Air Trooper worked well so I used that instead (actually, it is from the DTC Comic Pack, so it is a head, not a helmet. It is the same size and sculpt). 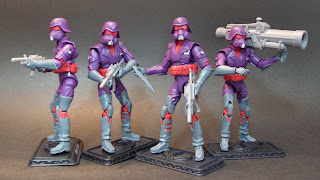 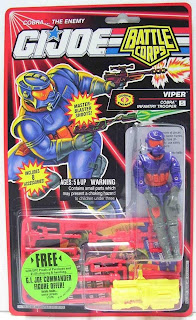